The Rosamond Gifford Zoo Storm Water Wetland and Cistern Project has been named a top project of 2013 by Storm Water Solutions! Fabco Industries has proudly contributed to this project by supplying its heavy duty StormSack design for the purposes of pretreating storm water prior to collection and reuse. The project is expected to capture close to 1.7 million gallons of runoff annually. Its goal is to reduce storm water runoff at the zoo, and improve water by reducing sewer overflows. Since its completion in September 2013, the project has been able to capture storm water and keep it out of the sewer system, as well as reduce the zoo’s sewer use fees. Fabco’s StormSack has helped turn the Rosamond Gifford Zoo into an ideal green infrastructure model. Read below to see what Storm Water Solutions Magazine had to say about the project. 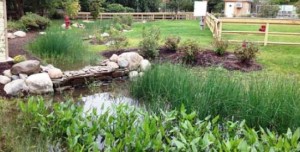 “The Rosamond Gifford Zoo Stormwater Wetland and Cistern Project is a part of the zoo’s Save the Rain Program. The project aimed to reduce storm water runoff at the zoo and improve water quality by reducing combined sewer overflows.

A new storm water wetland was installed and an open streambed was constructed to allow storm water from the wetland to flow into the swan and duck ponds. The wetland system captures storm water and recirculates it through the waterfowl areas. The wetland plants are used to naturally treat the water as it circulates through the system. Once the flow reaches the duck pond, it returns to the storm water wetland via a pumping system. This recirculation system greatly reduces use of potable water at the zoo, while simplifying and reducing the frequency of maintenance within the duck pond. 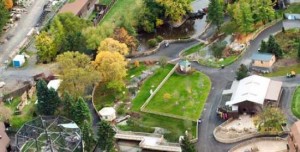 The other component of the project is a cistern system, which receives storm water from the bear exhibit and adjacent pathways. The water in the cistern is pumped into a newly constructed streambed between two existing ponds in the exhibit. The storm water will flow continuously within the recirculation, capturing storm water runoff and reducing the zoo’s dependence on potable water.

The project was constructed during the summer months while the zoo was fully operational; therefore, coordination with zoo management was essential to accommodate zoo patrons and reduce disruption to the surrounding exhibits. Coordination with the zoo team, inspectors and contractors resulted in a safe, well-built project. 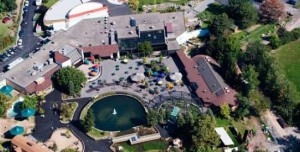 Since its completion in September 2013, the project has been able to capture storm water and keep it out of the sewer system, as well as reduce the zoo’s sewer use fees. It is projected that approximately 1.7 million gal of runoff will be captured annually.” 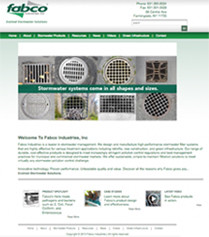 Fabco Industries is proud to announce the launch of our new website!  The new look is hard to miss but we wanted to make sure you check out ALL of the website’s new features. To better serve you, the website features a new design, user-friendly navigation, and a wealth of information, tools, and resources  for our customers.
In addition, we have also initiated a new social media campaign.  Follow us on profile Facebook, Google +, YouTube, Twitter, or through our live blog!